Bruce Springsteen’s Seeger sessions CD, ‘We Shall Overcome‘, is a rousing selection of mainly American folk songs from the repertoire of the iconic folk singer Pete Seeger. Here’s a live version of one of them, ‘Old Dan Tucker’:

Mudcat quotes the following information about this song:

“Composed by Dan D. Emmet, and sung by him with unbounded applause in Howe’s Amphitheatre of the Republic, New York.” Page 622 in “Marsh’s Selection, or Singing For the Million, Containing the Choicest and Best Collection of Admired Patriotic, Comic, Irish, Negro, Temperance, and Sentimental Songs Ever Embodied in One Work.” Three volumes in one, New York, Richard Marsh, 374 Pearl Street, 1854. Reproduced in Newman I. White, 1928, American Negro Folk Songs, pp. 446-447 (1965 reprint).

The whole thread can be found on Mudcat here.

Bruce Springsteen is of course one of the best known artists in American rock music today. His website is here.

Edith Fowke gives the following information about this song in ‘The Penguin Book of Canadian Folk Songs’:

Helen Creighton collected it in the 1930s from half a dozen singers in the Petpeswick and Chezzetcook districts, some twenty-five miles east of Halifax: they told her that it was formerly sung in the schools. Mrs Carrie Grover learned it when she was a little girl in Nova Scotia as Adieu to Nova Scotia, and Marius Barbeau found another version in Beauce County, Quebec, as On the Banks of Jedddore... The tune is similar to one Cecil Sharp gives for The Lowlands Low.

Mudcat Café has a good thread about the song, and its possible Scottish antecedents, here.

Gordon Lightfoot is so well known as to really need no introduction, but if anyone wants to learn more about him, his website is here.

On Monday 30th Marci and I are heading up to Jasper for the week, and we won’t be back until Saturday afternoon some time. Then the following week we’re off to visit friends in Saskatchewan. The daily traditional folk song will continue since I have a few cued up and ready to go, but I likely won’t be responding to comments or posting anything extra, as I’m not taking a computer with me.

So yes, for the next couple of weeks I’ll be suffering from Internet withdrawal symptoms in places like this… 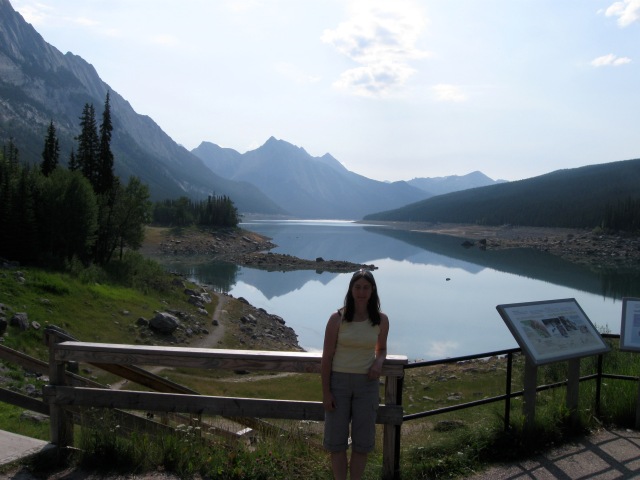 I first heard this song on an album by the great Nic Jones called ‘The Noah’s Ark Trap‘ (released in 1977 and sadly unavailable commercially because of a long-standing record company dispute). I still think Nic’s version is one of the best pieces of music I have ever heard. However, Jim Moray has recently recorded the song on his album ‘Skulk’, and he is seen in this video performing it at the Bristol Folk Festival in 2011.

If you’d like to compare the recorded version on Jim’s new album, here it is.

Mainly Norfolk has a brief discussion of the different recorded versions of this song (also known as ‘Dog and Gun’), and there is a very informative discussion about the history of the song itself at Mudcat Café.

Jim Moray is a very fine young folk musician in England who has done some very original things with traditional folk songs (which make up the majority of his repertoire). His website is here, and on it (unusually) you can listen to complete versions of every track on his new CD, ‘Skulk‘.

I first heard Crooked Still a few years ago at the Edmonton Folk Music Festival and was immediately impressed with their original sound and interesting take on old American folk and blues standards. Here they are singing ‘Ain’t No Grave’ in 2009 at the Greenhoe Theatre in Putney, Vermont:

‘Ain’t No Grave’ is an example of a song which has become a ‘traditional’ song, even though we know who the author was (and it wasn’t written that long ago!). It was penned by ‘Brother’ Claude Ely, a Pentecostal Holiness preacher who was born in 1922 and died in 1978. However, so many musicians have recorded versions of the song that it has truly taken on a life of its own; it was recently, and famously, recorded by Johnny Cash on an album of the same title released after Cash’s death. Mudcat Café has a discussion of the song here.

Crooked Still are: Tristan Clarridge (cello), Brittany Haas (fiddle), Aoife O’Donovan (vocals), Greg Liszt (banjo), and Corey DiMario (bass). You can find out more about them at their website here.

I thank Jonathan Hagger for introducing me to the wonderful music of the New Scorpion Band. As Jonathan comments about them on his blog:

To be honest I think they are somewhat excluded from the scene by its movers and shakers because they don’t quite fit the snobbishly rigid qualifications for membership that those with influence within the tradition impose. They can read music, they do not disdain the parlour folk and music hall traditions, they sing military songs and religious hymns and often turn up with classical musicians on records and in concert. But, I think they are far more authentic than all the middle class guardians of the tradition pretending to be Northumbrian shepherds or factory workers.

Here they are at the 2010 Fylde Folk Festival singing ‘Over the Hills and Far Away’.

Of course, this song was made famous by John Tams, who sang it on the ‘Sharpe’ movies. Tams had substantially rewritten the song, retaining the chorus but adding several verses of his own. The original song dates to the early 1700s and exists in at least two distinct versions, one to do with soldiering and the other to do with loving! Wikipedia gives a good overview of the two versions; Mudcat focusses here and here on the many permutations of the ‘soldiering’ version (which the New Scorpion Band is singing above), and Mainly Norfolk gives some good history as well.

The New Scorpion band is Tim Laycock, Brian Gulland, Robin Jeffrey, Sharon Lindo, and Robert White. You can find out a lot more about them from their website, which is well worth a visit.

UPDATE: It appears that the videos of the New Scorpion Band have all been removed from YouTube. My apologies; I will keep an eye on things and try to reinsert our video if it appears again.

In recent years, one of the big discoveries for me at the Edmonton Folk Music Festival has been the traditional Québecois band ‘Genticorum’ (made up of Pascal Gemme, Alexandre de Grosbois-Garand and Yann Falquet). I could talk about their wonderful harmonies, their infectious humour and sense of joy in their music, their gift for imaginative storytelling in the banter between songs and so on. But instead, why don’t I just let you listen to one of their wonderful songs?

This song, ‘Pinson et Cendrouille’, also goes by the name ‘La Noce Des Oiseaux’ (‘The Birds’ Wedding’), and I suspect it may be related to the well-known English folk song ‘Froggy Went a-Courting’. One version of the lyrics (with English translation) is found here, although it doesn’t quite match the lyrics Genticorum sing, and the story doesn’t quite have the hilarious character described by Genticorum when they sing the song live!

As for Genticorum, their web page is here (in English – there is also, naturally, a French version!). They also have a lot of songs uploaded to their Reverbnation page here. Enjoy! I can truly say that they are one of my favourite bands (even though I don’t understand a word they’re singing!).