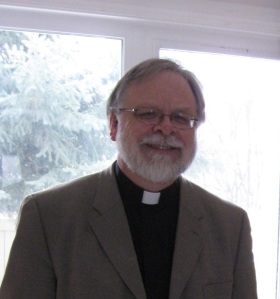 I don’t very often wear a clerical collar, for all kinds of reasons, but I’m thankful to be free to wear it. There are countries in the world where Christian clergy are banned from wearing any sort of clerical dress.

Apparently Daniel Dennett thinks clergy like me make it our business to control what our ‘adherants’ know. I assume that he sees my clerical collar as a symbol of oppression. One day Daniel Dennett and people who agree with him may be in a majority, and I may be part of a tiny minority. If the day ever comes when the vast majority of people in Canada are offended by a clerical collar and what it symbolizes to them, will someone try to ban clergy from wearing it?

I’m asking this, because I have seen links to posts on Facebook in which people are seriously saying, not only that women should not be allowed to wear a niqab at a citizenship ceremony, but that the niqab should be banned altogether. Those who claim that the niqab is a symbol of the oppression of women by men, and that no woman ever wears one by her own choice, now want to force women not to wear them. How is that not oppression?

This is the dangerous powder keg that our federal politicians have set a lighted match to in this election campaign. They may not have intended it to go any further than citizenship ceremonies, but extremists are already taking it a lot further.

Martin Niemöller, famous German pastor from World War Two who had the courage to stand up to Hitler, once said,

First they came for the Socialists, and I did not speak out –
Because I was not a Socialist.

Then they came for the Jews, and I did not speak out –
Because I was not a Jew.

Then they came for me –
and there was no one left to speak for me.

Indeed. And if I don’t speak up when they come for those Muslim women who want the freedom to wear the niqab, who will speak up for me when my turn comes? That’s why I want to be included as one of the #peoplelikeNenshi.

I work for a registered charity which is authorized to issue receipts for donations so that people can receive a tax deduction for their generosity. The more they give, the more they get back. When the federal and Alberta amounts are combined, the refund on donations over $200 is close to 50%, which is nothing to sneeze at.

However, our charity (which is a church) is, of course, strictly forbidden from engaging in partisan politics. If we were to do that, we would lose our charitable registration and would no longer be able to issue receipts to our members for tax deductions.

Does it bother me that I can’t engage in party politics in my official capacity as pastor of my church? No, not really. On the other hand, if I was working for a charity that was trying to alleviate child poverty in Canada, I might feel a little more constrained by the system. After all, child poverty can’t be solved by donations alone. To use an old illustration, if you start noticing that the river is full of drowning babies, it’s not enough to have an efficient rescue operation; sooner or later, someone needs to go upstream to find out who’s throwing them in. And the answer to that question may well have political implications. But charities aren’t allowed to go near that, or they lose their status and their ability to issue income tax receipts.

And now, behold the hypocrisy of the Canadian political system. Today I gave a donation to a Canadian political party (most of you will be able to figure out which one!). On their website, they promptly informed me that according to Canadian law, when income tax time rolls around, I will receive a tax refund equal to 75% of my donation!

That’s right, folks. Registered charities can’t get involved in party politics or they lose their ability to issue income tax receipts, but if you donate to a Canadian political party (which engages almost exclusively in party politics), you’ll get 75% of it back at income tax time. That’s over half as much again as you’d get for donating to a charity that helps to feed the poor, as long as they don’t get political about it.

You couldn’t make this stuff up, could you?

I’ve just discovered the excellent blog of the Pembina Institute. On the day after the Alberta election, executive director Ed Wittingham wrote an excellent piece on the opportunity for the new Notley government to make a real change in our province’s environmental policies. Here’s an excerpt:

One of the most pressing issues is Alberta’s approach to regulating (and ultimately, reducing) greenhouse gas pollution. The oilsands industry is Canada’s fastest-growing source of emissions. By 2020, Environment Canada projects Alberta will be responsible for 40 per cent of all greenhouse gas pollution nationally, with much of this growth coming from oilsands expansion. This upward trend is expected to continue until significant changes are made to the amount of emissions the province will allow, and the price charged to emitters who exceed the limit.

This spring, the NDP criticized the previous government for not doing enough on climate change, with Notley stating that Alberta was “way off track” in relation to its 2020 emissions-reduction commitment, and calling the delay in renewing the provincial climate strategy “profoundly irresponsible”.

The challenge of fixing Alberta’s flawed climate policies now falls to Notley’s government to resolve, and quickly — all eyes are on Alberta now that Ontario and B.C. have announced major next steps toward reducing emissions. After years of being named and shamed at the UN climate negotiations, Canada’s credibility at this year’s talks in Paris hinges directly on how it plans to address the runaway growth in greenhouse gas pollution coming from the oilsands sector.

I agree. I think it’s unconscionable how much of the rhetoric since the election has focused around how the new Alberta government is (in the eyes of the right) going to be an economic disaster for our province. First of all, they haven’t even started yet, and since their tax proposals (to give just one example) would still leave corporations better off than they were in 2004 under Ralph Klein, that seems rather far-fetched to me. But secondly, there is no mention at all of the environmental disaster that the PCs were leaving for our grandchildren to clean up (if anyone ever got around to cleaning it up) (see this page on the Pembina Institute website for more details).

The economy is important, of course, but government needs to be about more than the economy. Good stewardship of our natural environment is hugely important if there’s going to be anything left to pass on to future generations. The Klein government used to bang on about not leaving a huge government debt for our descendants to deal with. But what about the morality of leaving them a broken planet?